Why Antimicrobial Stewardship Matters: A Summary of the 2019 CDC Report on Antibiotic Resistance Threats in the USPublished November 18, 2020

In 2019, the Centers for Disease Control and Prevention (CDC) released an updated report of Antibiotic Resistance Threats in the United States. This update is the first since 2013 and comes with an updated and expanded list of threats as seen in the table below. 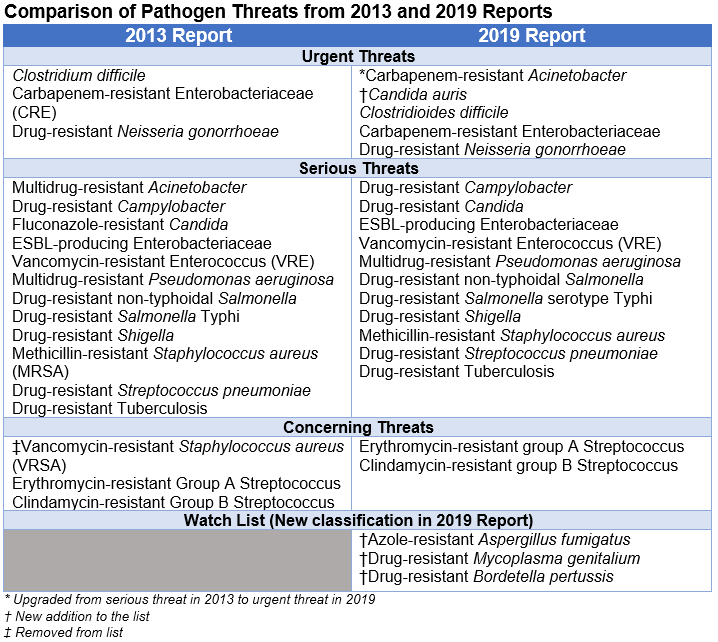 The CDC determines these pathogens and their threat levels based on seven factors: 1) clinical impact, 2) economic impact (when available), 3) incidence, 4) 10-year projection of incidence (new infections over the next 10 years), 5) transmissibility (how easily a pathogen spreads or causes infections), 6) availability of effective antibiotics, and 7) barriers to prevention. Based on these criteria, there were four major changes to the threat list in 2019.

Firstly, carbapenem-resistant Acinetobacter (formerly multidrug-resistant Acinetobacter) was upgraded from a Serious Threat to an Urgent Threat. This change was made in part based on the emergence of easily spread resistance mediated by mobile genetic elements that can be easily shared between bacteria. In addition to carbapenems, these bacteria are resistant to a large number of antibiotics, and there are few agents in development with activity against these resistant strains.

The next change in the 2019 Report was the addition of Candida auris to the list as an Urgent Threat. Candida auris is an emerging multidrug-resistant fungus whose prevalence in the United States increased over 300% between 2015 and 2017. It is easily spread between hospitalized patients or nursing home residents, and some strains have been resistant to all three major classes of antifungals.

Next, vancomycin-resistant Staphylococcus aureus (VRSA) was removed from the threat list. There have only been 14 identified cases in the United States since 2002, and direct person-to-person transmission has not been documented. Based on these facts, it was removed as a threat, but the CDC will continue monitoring for this pathogen.

Lastly, the CDC created a new “Watch List,” which contains three threats that are either uncommon or whose full burden is not yet understood: Aspergillus fumigatus, Mycoplasma genitalium, and Bordatella pertussis. Aspergillus fumigatus is a mold often treated with azole antifungals. Although few azole-resistant strains have been seen in the United States, there have been many in other countries. Mycoplasma genitalium is a sexually transmitted bacterium that can cause urethritis or cervicitis and can lead to pelvic inflammatory disease if left untreated. Few active antibiotics are available, and resistance to the recommended treatment, azithromycin, is widespread. Bordetella pertussis is the bacteria that causes whooping cough, which can have serious and even deadly complications. Antibiotic resistance in this organism is rare in the United States but has been seen in other countries. Vaccination remains the best method of prevention for pertussis. The CDC is closely monitoring the emergence and spread of these pathogens to lessen any potential public health impact.

As highlighted by the above facts, antimicrobial resistance is a continually advancing threat, and only through targeted health initiatives and judicious use of antibiotics will we be able to slow its spread. 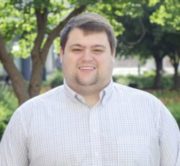 This content was provided by Andrew B. Watkins, Pharmacy Coordinator of Nebraska ASAP. Feel free to send any questions to anwatkins@nebraskamed.com.