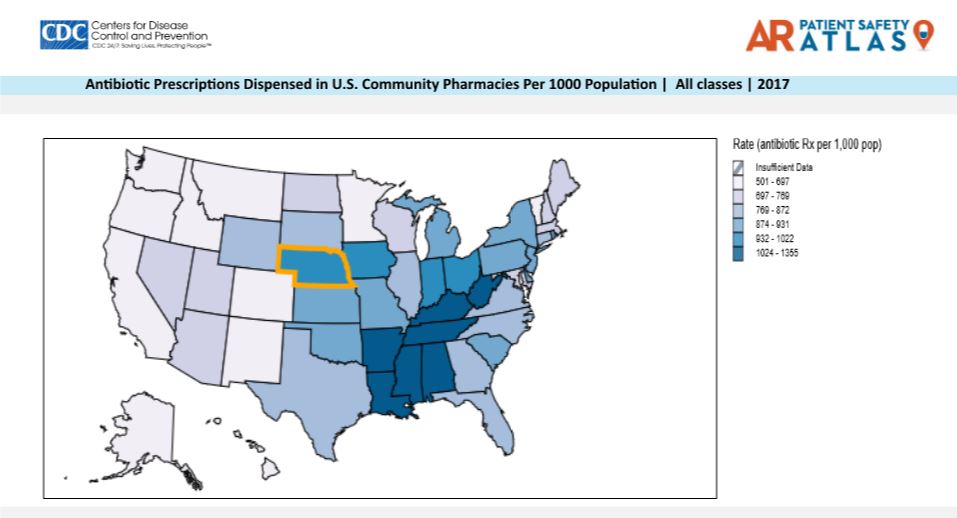 According to data from the CDC, Nebraska has consistently prescribed more antibiotics annually in the outpatient setting compared to the national average in 2011 to 2017.  In 2017, Nebraska ranked number 8 in outpatient antibiotic prescriptions.  Appropriate prescribing was estimated to be at the 50th percentile.

Antibiotic use is not without harm.  It is estimated that more than 140,000 emergency department visits annually are associated with adverse events from outpatient antibiotic use.  These adverse events included more commonly encountered reactions such as rash and diarrhea to ones that are less common but potentially life-threatening such as severe allergic reactions.  In addition, antibiotic overuse is associated with antibiotic resistance that can result in higher morbidity and mortality.  Because of these reasons and as a matter of patient safety, it is prudent to prescribe antibiotics only when necessary in all healthcare settings, and especially in the outpatient setting where most of the antibiotic prescribing occurs. 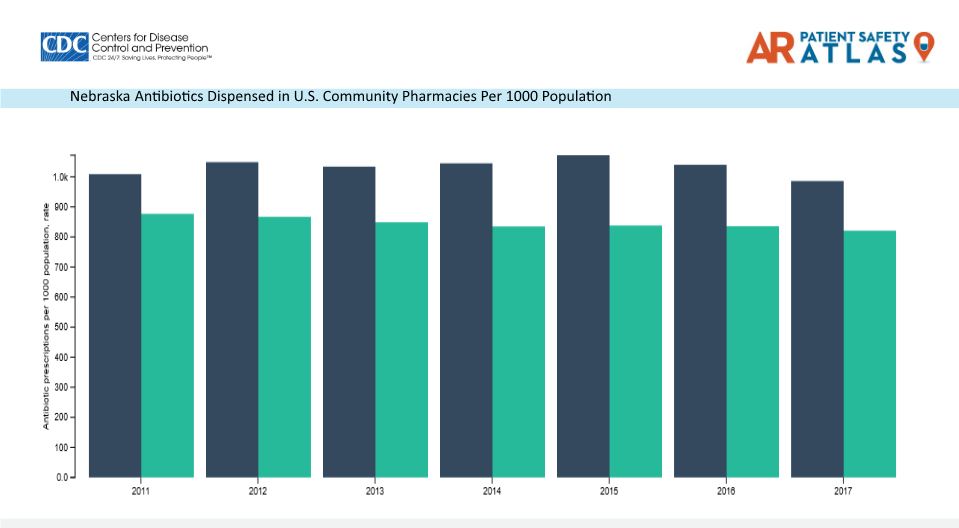 The prescriber and patient education materials and tools provided in this section will facilitate more appropriate antibiotic prescribing in the outpatient setting.  Click on one of the sections to the right to access these materials.

Proud to provide infection control support to Nebraska. We are always available for your questions!

Timeline photos"We started from scratch in formulating safe care protocols and procedures in all settings – inpatient, outpatient, procedural areas. It was an immense task that had to be done very quickly. Our protocols were adopted across the country, and our website was a recognized national resource.”- Mark Rupp, MD, chief of the UNMC Division of Infectious DiseasesRead more:www.unmc.edu/newsroom/2022/09/29/infectious-disease-team-honored-for-covid-efforts/ ... See MoreSee Less

Did you know that Nebraska ASAP has a #Youtube channel? We recently posted the 2022 #antimicrobialstewardship Summit conference videos. There is some great #eductation availale for free!www.youtube.com/channel/UCbRttgPKWu2z53Fj3OlKMxw/playlists#nebraskaicap #AntibioticResistance #infectionprevention ... See MoreSee Less

Make sure to join us today at noon CST for the #LTC webinar. We’ll be discussing the most recent COVID-19 guidance that was released by the CDC. ... See MoreSee Less

When this happens, it's usually because the owner only shared it with a small group of people, changed who can see it or it's been deleted.
View on Facebook
· Share

When this happens, it's usually because the owner only shared it with a small group of people, changed who can see it or it's been deleted.
View on Facebook
· Share

Please provide your details below to reach out to our ASAP team on any questions about Antimicrobial Stewardship.